As I mentioned yesterday, I was over in West Tennessee this weekend at my father’s. My sister was also there. I haven’t seen her since Leah’s funeral in July; and, I was both surprised and delighted at the physical changes caused by her commitment to herself.

She is more solidly in Onederland than she has been in something like 23 years. (We counted.) She hasn’t taken one of her arthritis pain meds in three weeks AND HASN’T NEEDED IT! Her pants look like a family has moved out of the seat of them prompting even the Barn Goddess herself to say that she needed to get some smaller pants! 🙂

She has lost 30 pounds, removing a combined total of 240 pounds of pressure off of her painful knees. WOW! That’s insane, right?! And it’s really hard to even conceptualize when you’re at the start of your journey – or it was for me.

Now, it just blows my mind when I carry in a 50-pound bag of the food I buy for my dogs. Carrying one from the car to the house, I acutely feel the pressure on the soles of my feet, in my knees and lower legs. Every minute of every hour in my life Before, I carried nearly two of those bags everywhere I went. While it was hard to conceptualize how much better I was going to feel when I was still in the Before, it’s a little hard to believe that my body withstood that pressure now that I’m in the After. 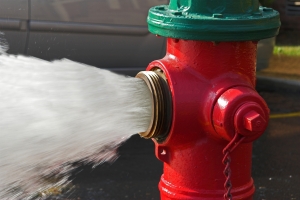 Sitting there at my father’s table, we added up the total weight the three of us have lost and kept off. 170 pounds. One hundred seventy pounds. We have lost between a fire hydrant (150 lbs) and a street drop-off mailbox (180 lbs). Using the Happy Body Ideal Body Weight Index (for whatever that’s worth) we have lost a man who is 5’10” tall. (I say “for whatever that’s worth” because I have no idea how that index was derived. According to it, I should weigh 125 pounds. Friends, if I weighed that, I would be skeletal. No thanks.) Lemme tell you: math has never been as much fun as it was Saturday afternoon!

That exercise alone was good for motivation for all three of us. Another good motivator is having clothes that fit. As I said, the Barn Goddess is even feeling it. I honestly think that if you removed all of the physical vanity from my sister’s body, you’d have room left over in the thimble you were storing it in. She is in no way vain about her appearance, yet, she recognizes the need to feel good about how she looks in her clothes. Plus, it’s just a super feeling to go shopping and have to buy a size smaller! (Clothing sizes are just a number. Yeah. Right.)

Chele’s progress has been at a pace that works for her. She started out with some small changes and just kept adding to them until, when taken as a whole, they became big changes – big changes that have yielded big benefits. As a doctor (whose advice I did not take) asked me years ago, “If you plan on living the next six months anyway, why not get healthier while you do it?”

If small changes make big ones, why not, indeed?