Minute course corrections.  You see it in any space movie.  The astronauts fire thrusters for various lengths of time to roll the vessel, propel it a little, get out of the way of something, or for some other mysterious and dramatic reason.  As I was walking the dogs on Sunday, I saw how I have to make those same minute corrections and calculations all the time. 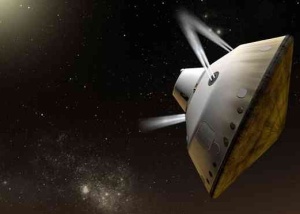 The first thruster I fired was a pretty big one.  It got me out of my chair and putting on my running shoes.  I had to fire it for several seconds there to overcome the inertia of the large stationary object that was Me. I had to fire again when I was wavering between going to the gym and going to the park.  You see, it’s easy to stop walking on a treadmill; but, when you’re at the park, you have to walk back to the car.  You can’t just stop mid-lap.  Once at the park, additional firings were required to stay on course for the five mile (four times around the outer track) walk.  My internal conversation included whining about my calves, whining about needing to use the restroom, whining about the impending rain, and even whining about needing a trash can to throw my gum into.  There was so much whining going on, you’d have sworn it was a Seinfeld episode.

The stone truth of all of this is: I am bone lazy.  I would rather lay on the couch and watch movies than go work out.  I would rather eat ice cream and cheese puffs than cucumbers and hummus.  I have unhealthy circuits in my mind.  Those circuits were reinforced over the better part of 45 years.  I would love to tell you that (mostly) two years of conscious effort to change the circuits has successfully rewired them.  That would be a complete lie.

I have to revamp the circuitry with nearly every decision.  The good news is that I can do it – that there is hope and that success is possible.  It does it get easier with continued diligence and I am hopeful that eventually, I will be able to make those corrections effortlessly and perhaps even unconsciously.

I trust that as I monitor my systems and stay the course, eventually, the thrusters will fire on their own.