It’s about getting up. 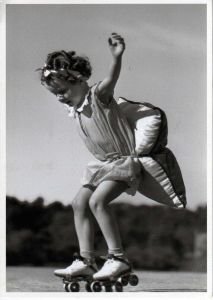 Last night I watched a documentary called Fat to Finish Line. I watched it as I ate a pint of Talenti Caramel Cookie Crunch Gelato on account of I do that kind of thing.

The film is about 12 people who formed a team to run a Ragnar Relay in Florida. Each of them has lost an average of 100 pounds – a couple of them still have that much to lose to reach their goals. Regardless, they have run 5Ks, 10Ks, half marathons and full marathons. They are nervous, but determined.  Well, except kind of one of them. She started crying and carrying on two miles into her ten mile second leg. She kept saying, “I can’t. I can’t. I can’t.” At four miles in, her teammates took over and finished the leg. Frankly, I wanted to smack her a little bit.

Then I looked at the spoon in my hand.

As I sit here writing, my left foot is in a VERY pink cast and it will remain there for at least another three weeks. I am limited as to what I can do. I am limited; but, I am not powerless. I was beginning to let myself feel that way when my boyfriend (who is one of the strongest people I have ever met and whom I admire tremendously) sent me the video below and challenged me to finish five sets of ten push-ups. I agreed to five sets of one push-up. Then I watched the video and the documentary.

When I first started this blog, I was writing all the time, feeling strong and good. Then I got knocked down and I faltered. I am weak and I feel terrible. But, as one of the runners in the documentary said, “It’s not about getting knocked down: it’s about getting up.”

So, friends, once again, I am getting up. If I need to, I will watch this video every day until I believe it again.

Oh, and though it took me awhile, I finished the five sets of ten.

Yesterday, my sister told me about a coworker of hers who is so overweight that the weight is really beginning to affect her health. Her health issues have gotten the lady’s attention and she’s ready to make some changes. She has a stationary bike and has committed to ride it for five minutes in the evenings.

It’s easy to discount that as “no more than five minutes,” but, if you are or have ever been profoundly overweight, you know that it means “I can make it for five minutes. I can do this.” And that is truly how it starts. I’ve said it before (but I think it bears repeating) that many of us think that we have to start an exercise program going all out. I’ve got to run a marathon within the week, after all, no pain no gain, right?

To begin with, I really did just walk my dogs. I added little accidental exercises throughout the day like parking further from the door or taking my shopping cart all the way back inside the store. Pennies make dollars. Steps make miles and ounces make pounds. The longest journey really does begin with a single step, or, in this case, five minutes on the bike. I am so excited for this lady! She will begin adding minutes before she knows it. She’ll start pushing herself as she sees that it takes longer for her to be out of breath. She’ll celebrate every additional second that she is able to last on the bike.

She’s also beginning to look at her food a different way. After lunch one day, my sister commented to the lady – we’ll call her Willa (like I willa do it) – about her lunch. Willa had eaten a grilled cheese sandwich and french fries. My sister pointed out that while the meal had been filling, there hadn’t been much nutritional substance to it. Willa had fed her body oils and carbohydrates with just the teensiest bit of calcium and protein hidden away in there. They started talking about nutritionally dense options, which makes “dieting”so much easier. At least my sister and I think so, meaning that 100% of Doty girls surveyed agreed – a HUGE margin!

It’s just like when I was a lifeguard. We were taught that after blowing the whistle to get a swimmer’s attention, give them a positive action since they typically hear only the last word you say. For instance, if a kid was running, rather than shouting “don’t run!” I yelled “walk!” The word told them what they could do rather than what they couldn’t. It seemed to work well with the water-logged kiddies and it works just as well with sugar-addicted goddesses.

You’ve heard about these guys, right? The cheetah and the dog at the San Diego Zoo that are best buds in spite of their instincts? That dog should have been a snack AGES ago; but, the cheetah loves the dog and the feeling seems to be mutual. Strange bedfellows, no doubt.

Yesterday afternoon, my mind drifted to the subject of strange bedfellows, drifted right on through that and ended up at estranged bedfellows – specifically, PMS cravings and my current menu. Verily I say unto you, never the two shall meet. Not even close.

You and I, we’ve been having these little visits for months now; so, we’re friends and I can tell you that I’m PMSing in a big way. The thing is, when I have food cravings this time of the month, I can normally pinpoint what it is that I want. This month, I can’t.

In addition to feeling cranky, I’m feeling lazy, as well, and I want something convenient. I’ve been running through the list of foods I haven’t eaten in over a month now and I’m coming up empty. I got nothing that sounds like it will do the trick. Last night, I ate one of the cupcakes I made for a coworker and that didn’t do it, either. (I must say, though, that the cupcake with its frosting of Cool Whip, neufchatel cheese and diced strawberries was a treat.)

As I sit here writing this, I’m drinking peach herbal tea and enjoying some dried plums. I used to enjoy prunes, but some marketing guy decided that we’re all way too hip and vital to eat prunes. Hip and vital people eat only dried plums. Whatever. I’m enjoying them even knowing that they’re not scratching that PMS food itch either.

So that leaves me sticking with my new menu, although mostly by default. I have to admit that if I identified this craving as cheese puffs, I’d knock that craving right out, then spend the next 30 minutes cleaning the orange dust off my keyboard. As it is, I’ll behave.

…the fundraising season, that is.

School is back in session and you know what that means! Yep. Cookie dough, popcorn, doughnut, candy and cookie sales. This weekend at the grocery store, I was approached by the cutest little con man to ever wear a Cub Scout uniform. In no time at all, he had separated me from my money and I was the proud  owner of a bag of caramel corn – premium caramel corn, no less. With pecans, almonds and stuff. As I walked away from the adorable huckster with the bag of popcorn coated with more refined sugar than I’ve eaten in two months, I lamented that I didn’t just give him five bucks and run like hell.

That’s what I do for the Girl Scouts. I give them money for their troops, but I don’t take the cookies. As I mentioned some time ago, I cannot be trusted with a box of Tagalongs; so, I make a donation directly to the troop instead. Normally, the troop gets some piddling little percentage of the sale. If I give them a five, they get 100% of that five and I don’t end up with tight pants. Plus, my five amounts to a whole lot more than they’d get from me buying three or ten boxes of cookies. Did I say ten? I meant four. Three or four boxes of cookies.

PTA, Girl Scouts, Boy Scouts, Band, Science Club, you name it – everyone seems to be raising money for something and they all seem to be selling refined sugar to do it. Whatever happened to selling candles and wrapping paper? I suppose fundraising is easier to do year over year if you sell something quickly consumed and we consume sugar a whole lot faster than we do candles and wrapping paper. In fact, until Katrina, I think I may have had wrapping paper I’d bought from a coworker’s child ten years before! Hey, it was pretty and I bought a lot. But, I just proved my own point. There’s no way on earth I’d have ten year old World’s Finest Chocolate covered almonds. It’s a minor miracle if I have ten minute old World’s Finest Chocolate covered almonds.

I truly sympathize with the clubs and organizations that have to raise funds. My mother was the leader of my sister’s Girl Scout troop from the time they were Brownies until they graduated from high school. Everything they did, I did. Plus, I was a member of a troop of girls my own age. I was a cookie seller times two! My sister’s troop planned a trip to Europe and we raised money for almost three years to make that happen. We had tag sales, bake sales, and car washes. We raked leaves, babysat, ran the city’s public pool in summer, worked as janitors at a church, and had fund-raising dinners. (Until that time when we gave the town food poisoning. Looking back, if we’d had a toilet paper sale in conjunction with the dinner, we’d have made a fortune! Missed a great opportunity.) In the end, we raised enough money for the troop to go to Europe on a six week tour. That was some serious fund raising, let me tell you. So, when I say that I get the pain of fundraising, I really do.

I get their pain and I support their efforts; however, after consuming that sugar-laden bag of popcorn and dealing with the wreckage that was my entire system afterwards, I’ll revert to my previous plan: