Guys, this post is mostly for the ladies; so, you can stop reading now, if you like – unless, that is, you’re one of those super curious men who wants to gain some kind of understanding into why your lady turns into a hormonal monster for three days a month. If you’re one of those guys, be welcome; but, be warned – this ain’t for the faint of heart, sugar. 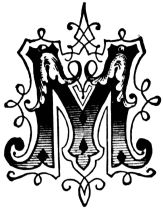 I was silent all last week; but, no worries, I’m still here and I’m still fighting the good fight. The week was particularly challenging since I was struggling with PMS while trying to maintain some kind of healthy eating habits. For me, PMS is what the medievals used to call a shape-shifter. No Mild, Meek, or Mirthful for my M. No, sir! My M goes for Melancholic, Mighty hungry, Mean Monster! Not usually all at the same time, mind you. Shape-shifter that it is, it changes from month to month and from hour to hour within the month. Some months I want salty, some months it’s sweets. Some months I’m exhausted – okay, that one is pretty much every month. Some months I’m crampy, some months I’m not. Some months I’m cranky – okay, that one is pretty much every month, too. It’s kind of like Space Mountain in Hell – dark, twisting and turning, leaving you feeling dizzy and nauseated (only also craving puffy Cheetos and chocolate ice cream). It’s a real treat even when I’m on a see food diet. Now since I’m back on a better eating plan, I’d love to tell you that it’s better, but that would be a lie and we both know it.

If you look at my food diary sheets for the last week, you’ll note some seriously unbalanced meals. You’ll see some bingeing and some just plain bad food choices; however, you’ll also see that I keep coming back with better meals and better choices. When I’ve craved something sweet, I’ve turned to grape Crystal Light – the acceptable adult version of grape Kool-Aid, my favorite. To satisfy the salty craving, I go with unbuttered popcorn instead of chips. I’ve eaten lots dried figs which are kind of like mainlining sugar. And that’s worked for the most part; however, I’ve not found a good substitute for ice cream (or frozen cashew milk or almond milk desserts that I eat – I’ll just call them all ice cream for simplicity’s sake). While frozen, blended bananas and mangoes are good and I can eat them most of the month, they’re not ice cream and the Monster is not fooled.

These last few days have been more about damage control than anything else. Sometimes, that’s what a reducing or a healthful eating style has to deal with – damage control. I follow a vegan diet; however, there are times when I’m someplace and I just eat the cheese rather than make a big deal out of it. Chocolate is rarely vegan and there are times when that is as necessary as air (true story, ladies?); so, I eat a little. So, I give a little here and there and make up for it later. To do anything else would be more stressful than I really need on top of my daily, constant stresses.

My hormones are returning to a safe level – thank goodness – although as recently as last night, I was jonesing big time for some Oreos. My sweetie didn’t have any, but he came up with an emergency Little Debbie Fancy Cake, and, because he’s a smart man, he tossed it to me and retreated to a safe distance. 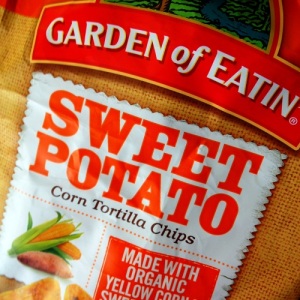 Friday, I shared with you that I was in the midst of PMS cravings and just could not figure out what would satisfy them. Well, that was then, honey! I found the food I was searching for – Garden of Eatin’ Sweet Potato Corn Tortilla Chips! Mmmmm. AND they let me stay in my current menu. Nirvana, right? Healthy junk food?

I didn’t say they were healthy. I said that they let me stay in my current menu. Not the same thing.

With my new vegetarian, nearly vegan menu, I get a lot of questions and end up in a great many conversations about it. In one conversation, a friend expressed surprised that an obese woman she’d just met was a life-long vegetarian. How can that be? How can a vegetarian be overweight at all, much less obese? I used to wonder the same thing.

I always had this image of a vegetarian as someone who ate mostly salads and steamed vegetables. Honestly, I didn’t really get the difference between a vegetarian and a vegan since I believed that they both lived on primarily twigs and grass, drank herbal tea, smoked weed and dropped acid. (Well, maybe not all of them.)

Vegans are vegetarians who don’t eat meat or any other animal product like eggs or dairy. However, even vegans can eat a wide variety of things that aren’t necessarily healthy including Oreos, many cookies, most candy, lots of different chips, some bagels and even many frozen desserts. Neither vegetarianism nor veganism is necessarily good healthism. (It’s not a word. I know that, just work with me.)

These folks ain’t subsisting on grass and twigs.

So, back to my sweet potato corn tortilla chips. Like all junk food, they are calorie dense, nutrient sparse. A serving (about nine chips – puhleeze) contains 140 calories, 1 gram of sugar, 2 grams of protein and 2% of the RDA of both iron and vitamin A. 2%? That’s nothing. The reason I chose them rather than some other chip is their ingredient list which contains nothing that I can’t pronounce. Malic acid is the only ingredient I didn’t know anything about. Compare that to other chips with ingredients like monosodium glutamate and disodium inosinate. While neither chemical is necessarily harmful, I’d rather my snacks have more easily pronounced ingredients. I feel better believing that they are a more natural option than some other choices out there.

Or, maybe I’m just kidding myself because it says “organic, gluten-free and non-GMO” on the package. Could be.  In any case, my cravings are satisfied, the PMS Beast is once again at rest, and the neighborhood is safe.

You’ve heard about these guys, right? The cheetah and the dog at the San Diego Zoo that are best buds in spite of their instincts? That dog should have been a snack AGES ago; but, the cheetah loves the dog and the feeling seems to be mutual. Strange bedfellows, no doubt.

Yesterday afternoon, my mind drifted to the subject of strange bedfellows, drifted right on through that and ended up at estranged bedfellows – specifically, PMS cravings and my current menu. Verily I say unto you, never the two shall meet. Not even close.

You and I, we’ve been having these little visits for months now; so, we’re friends and I can tell you that I’m PMSing in a big way. The thing is, when I have food cravings this time of the month, I can normally pinpoint what it is that I want. This month, I can’t.

In addition to feeling cranky, I’m feeling lazy, as well, and I want something convenient. I’ve been running through the list of foods I haven’t eaten in over a month now and I’m coming up empty. I got nothing that sounds like it will do the trick. Last night, I ate one of the cupcakes I made for a coworker and that didn’t do it, either. (I must say, though, that the cupcake with its frosting of Cool Whip, neufchatel cheese and diced strawberries was a treat.)

As I sit here writing this, I’m drinking peach herbal tea and enjoying some dried plums. I used to enjoy prunes, but some marketing guy decided that we’re all way too hip and vital to eat prunes. Hip and vital people eat only dried plums. Whatever. I’m enjoying them even knowing that they’re not scratching that PMS food itch either.

So that leaves me sticking with my new menu, although mostly by default. I have to admit that if I identified this craving as cheese puffs, I’d knock that craving right out, then spend the next 30 minutes cleaning the orange dust off my keyboard. As it is, I’ll behave.